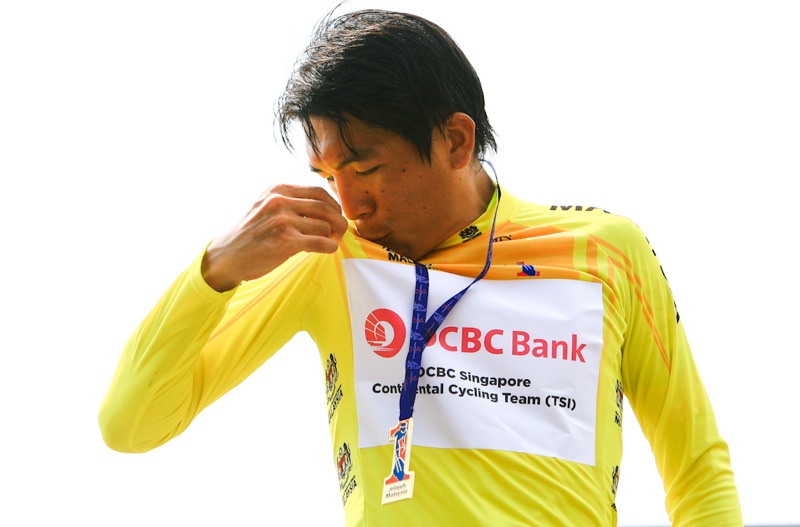 The OCBC Singapore Pro Cycling Team’s 26-year-old Malaysian rider defended the yellow jersey at Jelajah Malaysia for the second straight day by finishing safely within the pack in 47th place in Saturday’s Stage 4. Neither Loh nor the OCBC Singapore Pro Cycling Team has ever won the yellow jersey, awarded to the winner of the overall General Classification (GC) of a race, on the Union Cycliste Internationale (UCI) Asia Tour.

All that stands between Loh and the historic feat is Sunday’s 169.8-kilometre Stage 5, which takes the field from Malacca to Putrajaya. The stage features mostly flat terrain, although it does include the steepest climb of the race, a 212-metre ascent up Bukit Mantin. Neither will intimidate a well-balanced rider like Loh.

The OCBC Singapore Pro Cycling Team is determined to do whatever it takes to help Loh stay atop the leaderboard, just as it did in Stage 4. With help from his teammates, Loh clocked a time of 5:02:23 – the same time as stage winner Anthony Giacoppo of Huon Salmon-Genesys Wealth Advisers and the rest of the contenders. This allowed Loh to maintain his 14-second lead over Sergey Kuzmin of Polygon Sweet Nice Team in the GC standings.

Loh also retained the blue and white jerseys, awarded to the leader of the Best Asian Rider and Best Malaysian Rider classifications, respectively. The OCBC Singapore Pro Cycling Team remained perched at the top of the Team General Classification standings as well, 8 seconds ahead of Synergy Baku Cycling Project.

Justin Cheong, team manager of the OCBC Singapore Pro Cycling Team, lauded the performance of Loh’s teammates just as much as Loh’s. Stage 4, the longest stage of the race, stretched 206.3 kilometres from Johor Bahru to Malacca. Throughout the stage, every time one of the GC contenders attempted a breakaway, an OCBC rider chased him down and kept the peloton intact. This eventually led to the bunch sprint at the end and ensured the majority of the riders were credited with the same time.

“The boys gave everything they had to keep Sea Keong in the GC lead,” Cheong said. “They all want Sea Keong to win the yellow jersey as badly as he does. This would be a massive step forward for the team and for Sea Keong himself. The boys will burn every ounce of energy they have to try to make it happen in the last stage of the race.”

Leading the OCBC Singapore Pro Cycling Team in Stage 4 was New Zealander Jason Christie in 13th place, followed by Malaysian Ahmad Haidar bin Anuwar in 19th and Singaporeans Low Ji Wen in 32nd, Goh Choon Huat in 49th and Ho Jun Rong in 106th. All except Ho were credited with the time of 5:02:23, while Ho finished in 5:08:02. Christie remains in 10th place in the GC, while Low is the highest-ranked Singaporean in 21st place.