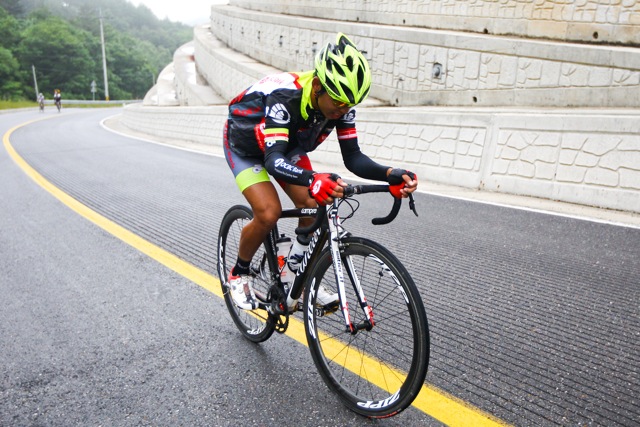 26 June 2013 – LOW Ji Wen raced to the best stage finish by a Singaporean on the Union Cycliste Internationale (UCI) Asia Tour this year, capturing one of the OCBC Singapore Pro Cycling Team’s three top-12 finishes in Stage 1 of Jelajah Malaysia on Wednesday.

Low crossed the line in 12th place in a time of 4:15:30. Malaysian Loh Sea Keong led all OCBC riders with his 7th place finish in a time of 4:13:52, 12 seconds behind stage winner Kiril Pozdnyakov of Team Baku Cycling Project. New Zealander Jason Christie recorded the other top-12 result, clocking a time of 4:15:30 to secure 11th place. The trio helped the OCBC Singapore Pro Cycling Team rank second in the team General Classification (GC) after the first day of competition.

The previous best stage finish by a Singaporean this year came in Stage 6 of the Tour of Japan in May, when Low took 17th place.

The OCBC Singapore Pro Cycling Team adopted an aggressive strategy right from the start, despite a downpour that went from heavy to torrential as the day went on. Loh, Christie and Low joined a breakaway that opened up a gap of more than 10 minutes on the peloton midway through the race. With about 20 kilometres to go, Loh joined an attack consisting of 10 riders, including the eventual winner Pozdnyakov, but he fell short in the final kilometres.

“We rode a solid, aggressive race today,” said Justin Cheong, team manager of the OCBC Singapore Pro Cycling Team. “Three riders in the top 12 make this a good showing for us, and we hope to build on this and get onto the podium in the next few days.”

The OCBC Singapore Pro Cycling Team is coming off a brilliant showing at the Tour de Korea, its most successful UCI Asia Tour race in team history. The team captured podium spots in Stages 7 and 8 to cap off the race, as well as a top-five finish in the General Classification (GC). Singapore’s only professional cycling team has seven podium finishes on the UCI Asia Tour so far this season.

Low and his teammates will try to add to that tally when Jelajah Malaysia continues on Thursday with the 197.6-kilometre Stage 2, which begins in Rembau and ends in Batu Pahat.